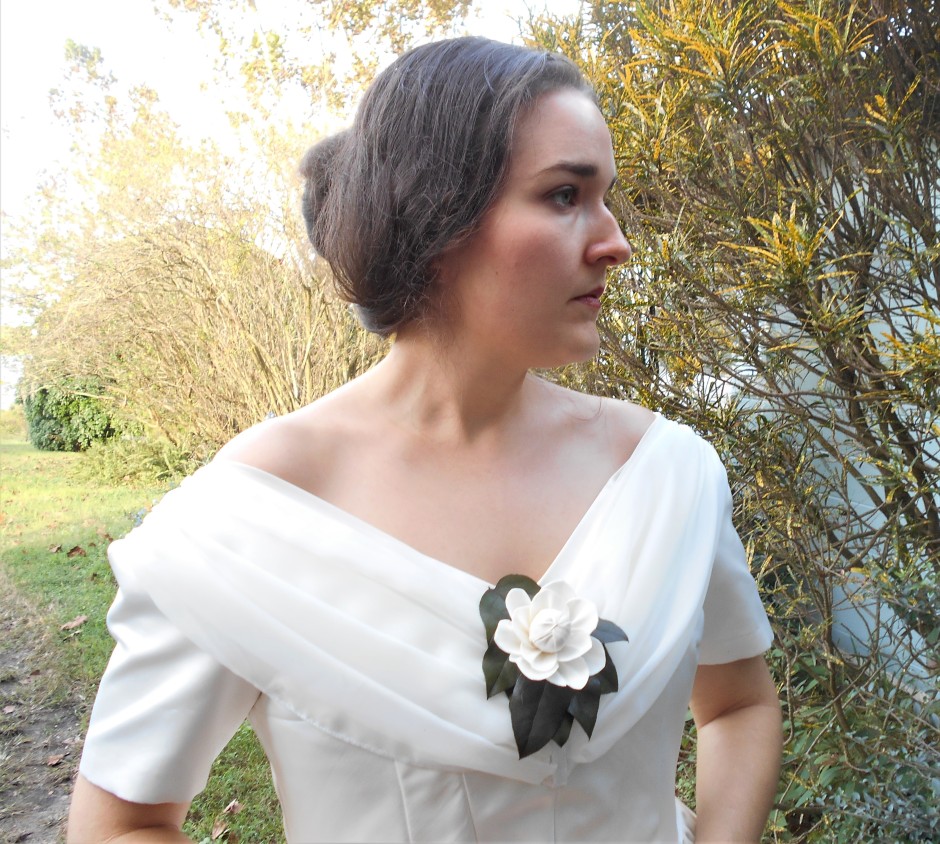 With the satellite repaired at my local haunt, I returned to the theater to punch my ticket for La Traviata, an opera, which, while not a favorite of mine, is one that cannot be denied no matter how many times it is shown in the theaters ─ the music is just too good ! After all, who can resist a bubbling brindisi and soaring arias ?

Although there were some initial issues with the picture quality and crackling sound in the cinema, the performance waxed better and better, culminating in one of the greatest finales I’ve ever seen incarnated in the opera. The tears were real. The emotion was all-encompassing… I love a good death scene and this was it ! Bravi, Nadine and Stephen !

Twice had I seen La Traviata in the theaters before this current jaunt and as I was beginning to think of ideas for my latest outfit, I had one prohibition: I did not want to wear another red dress ! My opinions about Michael Mayer’s revival production haven’t changed much from my first time seeing it in 2018 and Susan Hilferty’s costumes, although beautiful, were not something I wanted to replicate for my own closet. Rather, I was inspired by the original Violetta, the one immortalized in Alexandre Dumas Jr.’s novel, La Dame aux Camélias.

Marie Duplessis, converted to Marguerite Gautier and Violetta Valéry in written and theatrical texts, was the real-life Parisian courtesan who lived and died during the 1840’s. Over the summer, I read La Dame aux Camélias and was caught between frustration and pity over Marie’s hapless fate. I wanted to recreate her. And so, I began researching the time period and everything central to women’s fashion.

Janet Arnold’s Patterns of Fashion 1 was my treasure trove for resources and my aim was to use one of the extant designs as the basis for creating my dress.

Although enlarging the corresponding pattern pieces in the book to their proper scale (800%), an initial mock-up proved that more alterations would be needed in order to have the dress fit my figure. Time was like quicksand through the hourglass and the thought of applying modern day adjustments was a hopeless endeavour. Another thought popped into my mind: draping !

I had never draped in my life, but it seemed like the more expeditious route to pursue. What did I have to lose ? Using the magnified patterns as a guide, I attempted my first draped garment. My results were appealing.

Transferring the darts and adding seam allowances to the muslin pieces made for quick work, but more fitting issues arose as the bodice was cut too short and the waist was left too loose for my corseted figure. Oh, well ! It wasn’t too shabby for my first attempt at a couture technique.

With a hairdo that had my mother revolting in horror, I was ready to enact my tribute to Marie Duplessis, the “real” Violetta.

In addition to draping, I also tried my hand at cartridge pleating for the skirt, piped the armholes and waistline, and used a hook and eye placket to close the back. So 1840’s !

The creamy white satin was stunningly gorgeous, but by far my favorite part of the outfit was the wooden camellia magnet corsage that my cousin, Rosemary, fashioned for me.

With naturally preserved salal leaves, the bloom completely set off my outfit. Rosemary has a tremendous business creating real-look softened wood florals for weddings and events. And she ships worldwide, too, so be sure to check out her site ! https://www.rosemarysgardenflorals.com/

I loved wearing this outfit along with all the Maria Callas/Scarlett O’Hara vibes it brought me. Through a sickly, “kept” woman, I learned much about the 1840’s and opera’s greatest heroine. Marie Duplessis: the real Violetta.

At last ─ a new production of La Traviata ! If you recall, I was not a fan of the previous Met production of Verdi’s timeless tale. A gender fluid mob of tuxedoed chorus members and a bald-faced clock certainly didn’t fit within my perceptions of the glittering Parisian world of Violetta Valéry.

Thankfully, that production is now old news. With Michael Mayer stepping in to create a new Traviata, I was more than enthused to supplant a fresh image in my mind of how La Traviata should be staged. The released promotional design concepts seemed promising for an enchanting, whimsical production.

While living up to my expectations of a more traditional Traviata, I wouldn’t call it a hands-down winner. Christine Jones’s sets were beautiful, as were Susan Hilferty’s costumes, but the brightness of the colors and the curly embroidery detailing on Alfredo’s jacket (and the chorus members’ attire) could only summon to mind a Disney musical on Broadway.
All things considered, I was pleased by this production of La Traviata and how it partially fulfilled what had been my initial hope: to see a traditionally set performance of opera’s immortal tragedy.

Costuming possibilities are rich for Traviata ! Voluminous skirts, statement bodices, and historical implications all play a part in most mainstream performances. Since Michael Mayer’s production was making its world debut at the Met, I had no past performance pictures to reference for designing my costume. All that was available was one promotional sketch released by the Met.

Ambiguously lost between the 18th and 19th centuries, the image lacked the clarity I needed to carry out my design plans. My struggles with coming to a creative solution reached near delirium as I fiddled with different gown styles and ornamentation to no avail…

Eventually, I e-mailed Susan Hilferty, the costume designer for the opera, fishing for possible details. Unsurprisingly, the bait remained on the hook.
With time running out, I resignedly choose a similar style as the promotional sketch. And since the Live in HD broadcast was scheduled just 10 days before Christmas, how could I go wrong with a stylish scarlet gown ?

I categorized this dress under ‘Couture’ because of its showstopping grandeur and formality. But don’t be fooled─ its interior was a mess ! In preparation for draping the outside of the bodice, I sewed the lining only. Multiple fittings promised a success.

Less than a week before the opera, I carefully began folding and manipulating strips of my red matte satin and pinning them to the bodice, arranging them attractively as I went. Once the drapes were secured, I steam pressed them and was ready to try on the gown for the final fitting…

However, when I slipped into the gown, it swallowed me like an engulfing wave ! The dress was HUGE and I didn’t know why… It fit perfectly before I applied the drapes. Panic struck as it was the day before the opera and I didn’t have a dress to wear ! The rest of the day was spent taking in the central back seams and resewing the zipper innumerable times. Each alteration led to another problem and now I was seriously contemplating a Plan B. Finally, at 8:30 p.m., I finished altering the dress to where I felt confident that it wouldn’t fall to the floor as I wore it to the opera. What a close call !

Oh, but I wasn’t out of the woods yet… Throughout the day at the theater, I felt the dress becoming larger and looser with every movement. Fear of a ebbing gown pressed against the forefront of my mind as I consciously made efforts to prevent an embarrassing situation from occurring.
Unzipping the gown in the evening was an utter relief ─ I made it through the opera without a wardrobe malfunction !

Pretty on the outside, tragic on the inside… It’s almost as if the dress had been Violetta herself. And also like Violetta, the long red dress was permanently retired.

Everyone knows La Traviata. Whether you’re an exuberant opera fan or not, the tuneful music that sets the story of the consumptive courtesan, Violetta, is as recognizable as the Ten Commandments are to a man without Faith. From countless television commercials, to the iconic chick flick, “Pretty Woman”, it’s hardly a secret that Verdi’s 1853 hit left an indelible stamp on the opera world as well as in pop culture.

Typically, I strongly prefer to experience an opera set traditionally before ever dipping my toe into the pool of a modern interpretation. But although an abstract production, I still wanted to see La Traviata when it came to theaters. Willy Decker’s stark sets and tuxedoed chorus members stripped the scenes to minimalist proportions. Languoring in a curve of the corrugated circular stage sat an enormous face clock with a latent theme. Was the intent ─ to allegorize Violetta’s time running out ─ effective ? That’s debatable. Unless previously enlightened, the concept was rather abstruse to grasp ─ at least it was for me. However, there was one upside to the bare bones production and that was the adorable little red dress worn by Violetta during the vibrancy of the opera.

Since debuting at the prestigious Salzburg Music Festival in 2005, the production’s scarlet flouncy floral brocade dress has been worn by leading sopranos around the world. From Anna Netrebko to Natalie Dessay, the pictorial research was readily available. Hitherto, my only sewing projects amounted to a yukata sewn for Madama Butterfly and a mop cap for my Hebrew slave costume for Nabucco. To take on a complex dress, I needed a real pattern. And after months of scouring and rumination, I found it !

With a full pleated skirt and the promise of Palmer and Pletsch fitting, I was elated to begin sewing McCall’s 6834 as my Traviata pattern. But obviously, some alterations needed to be made to elevate the style to the Violetta Valéry standard.

First adjustment ─ the front and back neckline. My goal was a “rounded square scoop” neckline for the front and so I fiddled with whittling down the existing pattern to how I intended it to look. But I needed help, especially with the curve of the back, so I pulled out an old sleeveless dress pattern from my mother’s bulging pattern box and used its pieces for the design of the straps and necklines. So far, so good !

The dress was a near replica of the one worn in the opera. So uncanny was the resemblance that a nearsighted lady, slowly forging her way towards the concession stand during intermission, came close to bumping into me where she halted and gasped, “You look just like Violetta !” The greatest of all compliments was received.

Because this was my first commercial sewing pattern project, I made many mistakes. My sizing was off and goodness, the rosy polyester satin frayed terribly ! The fibers continued to shed and tickled my bare legs with every step. Carefully, I toddled around the theater in my shiny crimson pumps, allowing a twirl every now and then.

The evening encore outing was a moderate success, however I look forward to seeing a more traditional Traviata in the not-too-distant future. Whether in a flouncy red cocktail dress or a grand antebellum ball gown, one thing remains constant: the emotional power and beloved recognition of Verdi’s timeless opera, La Traviata.