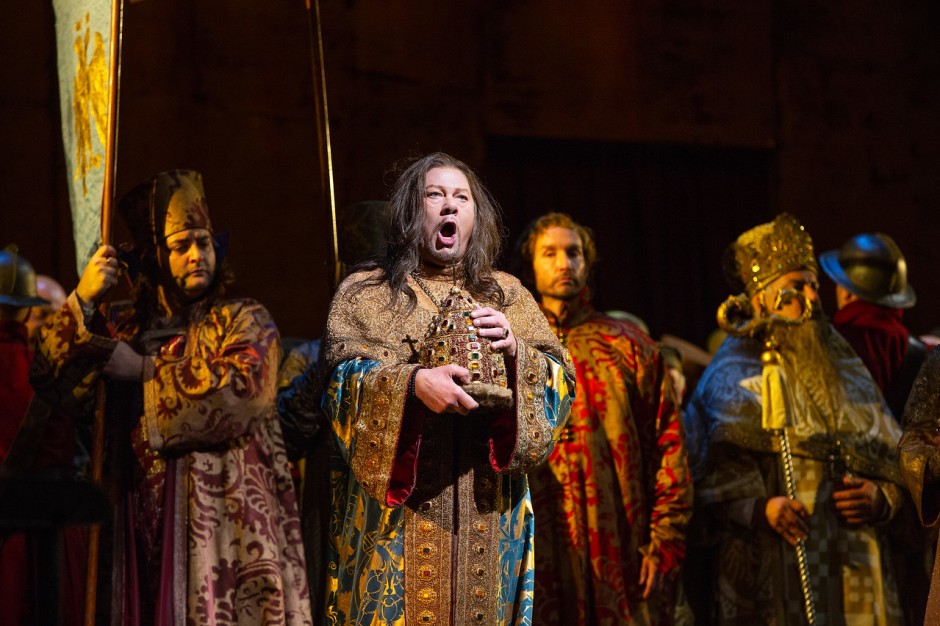 Opera is back at the Met for the 2021-2022 season with its Live in HD opener, Boris Godunov, a Pushkin-based Russian opera about a dubious tsar and the haunting of his rise to power. To scale down production, this was the first time that the Met performed the opera in its original 1869 format, which had obvious distinctions: no leading lady, no intermissions.

Due to technical difficulties at the theater, our local audience missed the first 20-30 minutes of the performance and was left to mentally piece together the fragmented story. An inauspicious omen for the opera ? I think so… Truth be told, the opera felt disjointed ─ whether due to the composer’s intentions or the abbreviated simulcast narrative, I can’t be sure. While I was disappointed in the latter, I went for the Russian language experience and René Pape and was duly rewarded by each. And as a bonus, the audience was compensated with free tickets and a free small popcorn for the inconvenience. Nice !

As there was no central female character in this version of Boris Godunov, I had to get creative with my outfit. Intriguingly, it was the Russian people that provided the influx of inspiration. I wanted to be a peasant (or serf) and knew just what I would wear…

The sarafan is a traditional Russian folk dress popularized by peasants, but was also worn by the dignified in the imperialist regime. Typically worn with a loose shirt and apron, the jumper can be made as plain or as fancy as a seamstress wishes. Since my aim was to look poor and deplete on the outstretching Steppes, I left much of the red washed linen and cream double gauze as unadorned as possible.

This was my first time using a Folkwear pattern, which has long been on my sewing wish list. Included in the packet were detailed instructions on how to modify (or modernize) the traditional style of the garment as well as helpful information for embroidering the shoulders of the blouse. I opted to gather the back of my sarafan and stitched matching ribbon to hold the fabric in place.

A scarf from my mother’s dresser drawer transformed into a babushka tied around my head and the single braid trailing down my back.

Although I was thrilled with my authentic creation, someone else was not… “You need to throw that out right after you wear it; it’s AWFUL !!!!!” wailed my mother as I walked out dressed in full costume. She grimaced and turned away after every press of the camera button ─ it’s a wonder I even got any pictures to share !

As (un)flattering as the sarafan may have been, it was the perfect outfit for an opera where the peasantry plays a major role. I just wish I had been able to see the entire opera !

Prior to the latter months of 2015, a Russian opera wouldn’t have turned my head. Ha ! How uniquely situations can change… As an autodidact of the Russian language, I was so excited to see Tchaikovsky’s Eugene Onegin and even more enthused to witness another performance by Anna Netrebko, half of the reason I began learning Russian in the first place.

This was to be a reunion of sorts ─ three of the singers whom I first saw in Il Trovatore in 2015 (Anna Netrebko, Dmitri Hvorostovsky, and Štefan Kocán) were scheduled for Onegin, but sadly, circumstances beyond the control of human capacity altered these best forged plans. With Dmitri Hvorostovsky bowing out due to advancing brain cancer, Peter Mattei stepped into the shoes of the snobbish title cad.

Strangely, the entire cast was Slavic except the Swedish Mattei, who felt so much like an outsider because of it ! I don’t know if it was his non-native tongue, his towering stature, or his graying goatee, but there was an obvious distinction between him and his fellow cast members. Even in spite of the casting swap, I delighted in listening to the Russian words in hopes of recognizing a few. Surprisingly, I was able to distinguish brief passages of verses, which thrilled my scholarly applications. My broad smile was impenetrable.

For an operation that was almost purely Russian, an equally felicitous outfit was required. I knew I was going to wear my long black velvet dress, but what else ? A sleek, matching velvet stole factored into my plans of a stereotypical Russian oligarch look of winter temperaments. But the stole was dismissed in favor of the serendipity thrown my way: “I’ve got this long black velvet coat that I saw at the thrift shop ─ do you want it ?” my friend, Paula, asked me a few weeks before the date of the opera. Without a word, I nodded my head up and down in a manner that was akin to vigorously shaking a can of spray paint. Да, пожалуйста !

The long duster was a thrill beyond belief ─ each time I stepped forth, a trailing breeze would catch in the sails of the velvet. I felt like one of those guys in “The Matrix” !

With my outfit set, all that was needed was a trademark fur hat. Often called an ushanka, I needed a more basic pillbox version of the traditional Russian winter headwear. To start, I crocheted a base hat out of black yarn and then bought 6 inches worth of faux fur at Jo-Ann Fabrics. After covering the sides and top of the hat, I still had a fraction of the fur left over. The total cost ? Around $1. Now that’s what I call a deal !

Fur cuffed gloves and a stylish clutch completed my black-on-black ensemble that was purely по-русски.

Eugene Onegin was well worth the wait for the satisfaction of applying my new language skills. Maybe the next time I have the chance to see it, I’ll recognize even more of Pushkin’s verses while simultaneously being swept away in Tchaikovsky’s melodic score. Time to return to my studies…