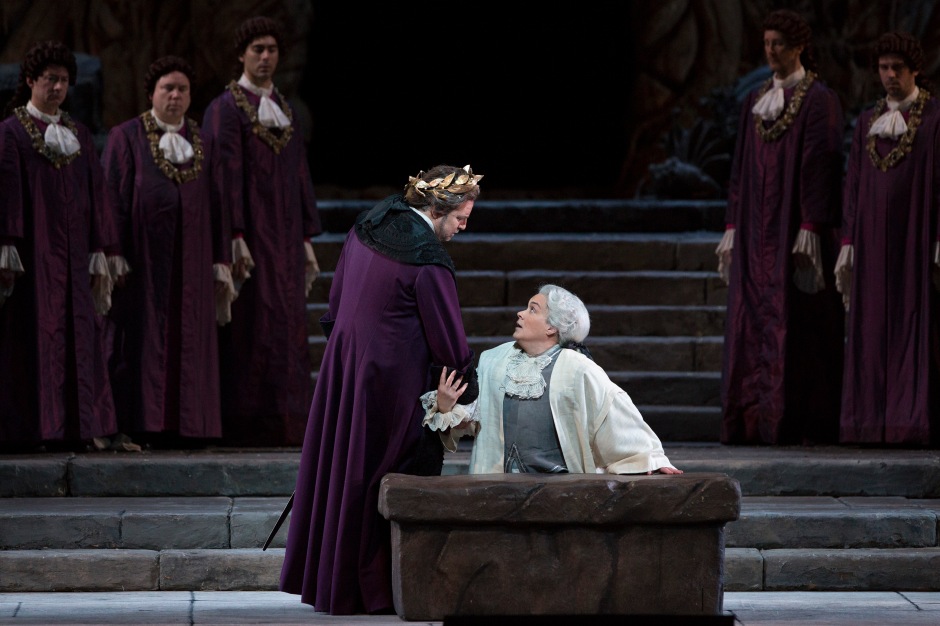 The brainchild of a 24-year-old Mozart in the spring of his career, Idomeneo embodies drama and torment on an intense scale. A Trojan captive bemoans her plight of wartime displacement. A runaway Grecian princess seethes with humiliation and jealousy from unrequited feelings. A father and king, crossed between the angry seas ─ and even angrier gods ─ suffers from the anguish of the cruel task that besets him.

While the basis of the plot was heavy ─ the title king, after being saved by the gods during a disastrous storm at sea, must kill his own son as recompense ─ the music was quite the opposite. Comprised of a windswept coterie of strings and woodwinds, the score was typically Mozartian and showed the beginnings of his lauded career. Singing the trills of early Mozart was made to look easy as Matthew Polenzani gave a stirring performance as the king. His voice was unhampered, but his soul was not.

The women provided for some much needed romantic rivalry to break up the repetitious monotony of the staid opera seria format. It’s true─ the opera was far too longwinded and soporific for my withering patience as I reached my home well after 6 that evening. At least the textured costumes and the spastic mad scene provided ample attraction and distraction from my jadedness.

Loosely based on the lace and jewels of Elettra’s gown, I snagged a favorite from my mother’s closet and made a simple alteration. The bright blue dress, being 8 sizes too big for me, would have swamped my figure more than the devouring seas of Idomeneo. A simple fix, I ran a line of baste stitches up the back of the dress and, voilà ! The dress fit. My mother was horrified with my action, let me tell you, but I assured her the stitching could easily be removed as I promptly pulled out the threads after the opera was over and the pictures captured.

My headpiece was a borrowed transformation. Previously, the black glittered tiara sported red rhinestones along the top points and an attached piece of black lace.

First popping out the red rhinestones, I replaced them with standard white ones and added gold fan sequins for seaside flare. They coordinated with my dress and the mantilla was beautiful enough for a princess. In case you were wondering, I removed all the sequins and replaced the original red jewels before I returned the accessory to its rightful owner.

Isn’t that necklace fabulous ? It’s a Metropolitan Museum of Art (also affectionately nicknamed “the Met”) replica given to me as a present from Aunt Countess. I cherish gifts from travels afar, much like the shell necklace and pashmina shawl that I wore to The Pearl Fishers the previous year. While New York City isn’t as far-flung as ancient Crete, the necklace made a statement worthy of Elettra’s tempered fury and Mozart’s fledgling opera.