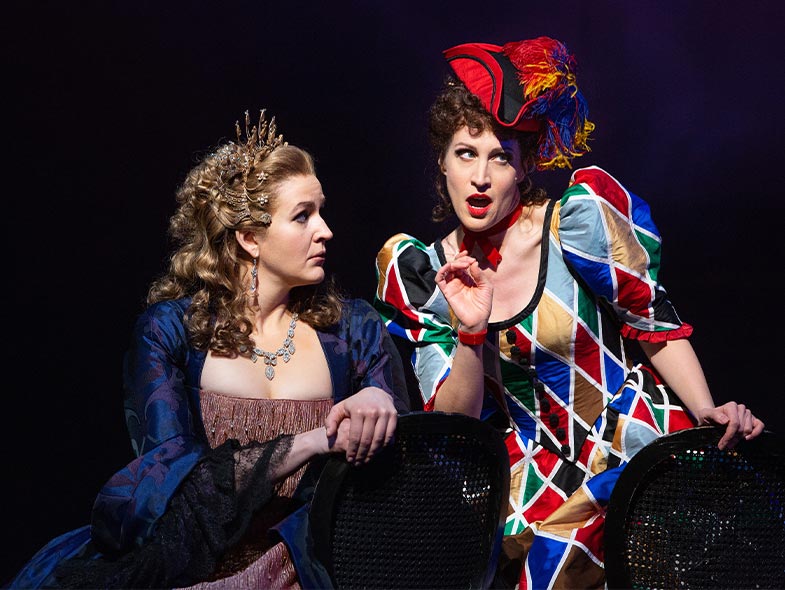 If there is an opera that causes more bouts of stifled exasperation or muddled confusion than Ariadne auf Naxos, its title remains a mystery. The music─ sublime, the plot─ a headscratcher; Strauss’s “opera within an opera” elicits both “ahhs !” as well as “huhs ?!” At least, that’s how I felt when I viewed the opera as part of the Met’s free streaming that was offered when the house was dark.
Armed with the illuminating advantage of past experience, I had my reasons for attending this current Ariadne, but none greater than to see and hear Lise Davidsen as the prima donna/exiled goddess.

With the voice of a titan and the face of a schoolgirl, there is little doubt that Lise is a star. Unleashing her full power during “Es gibt ein Reich” was like having a blast of thunder rattle your bones. An answer of satisfaction was given to the promulgated hype, but what took me by surprise was the caliber of the performances given by the other singers. Isabel Leonard’s frustrated idealism as the Composer won my fervent applause.

Opera seria interpolated with an Italian farce sounds strange, but the plot of Ariadne auf Naxos was much clearer to me the second time around and really deserves a further listen. With the cast that performed and the resplendent orchestra of the Met, that task was highly agreeable.

Despite being the titular character of the opera, Ariadne is not that interesting of a leading lady. She’s weepy, melancholy, and a touch morbid over her present fate of lonesome exile. She may have a great aria, but for the most part, her character is just “blah” until Bacchus sails in and whisks her away to the heavens. However, there is a complete comic foil to Ariadne’s gloominess: the coquettish clown, Zerbinetta.

When I watched the 2003 Ariadne auf Naxos with Deborah Voigt and Natalie Dessay, I was captivated by the spitfire vocalism and personality of the coloratura soprano, Zerbinetta. She steals the show, every time. In addition to her dynamic role, she also has the best costume in the whimsical Elijah Moshinsky production ─ harlequin from top to toe with 18th century embellishments. Who would want to play Ariadne when Zerbinetta’s character and outfit are so much fun ?! My costume choice was easy: harlequin, please !

I made everything about my outfit, excluding the tights and shoes. While it was one of the most labor-intensive projects I’ve completed to date, all the components played together into a kaleidoscopic array of FUN ! All that was needed was a little bit of sass…

As a creator, I love all my “children,” but this outfit, which started out as entirely white, was an especial favorite. And that hat ! Would you believe that it was made out of felt and cardstock ?! The cockade of feathers and tulle tufts solidified my look as uniquely “Zerbinetta.”

For the ‘step-by-step’ on how I created Zerbinetta’s kaleidoscopic harlequin costume, check out the post below:
https://costumeclosetcouture.com/2022/04/04/diamonds-are-a-girls-best-friend-zerbinettas-harlequin-costume/

“All women are like that…” so says the cynical Don Alfonso to his naïve friends as he demonstrates the fickleness of the fair sex… But is the assumption ─ that women are bound to stray from their lovers if given the chance ─ an accurate claim ?

While sometimes considered outdated for modern society, Mozart’s piquant comedy about the test of fidelity through trickery was nothing but a delight to me. Lesley Koenig’s picturesque production was understated and elegant and the cast was just as pretty, especially the two lovestruck sisters, Fiordiligi and Dorabella, played by Susanna Phillips and Isabel Leonard. With their dark brown hair and fair complexions, it wasn’t a stretch to believe them to be blood relatives.

Their fiancés were adorable. Ferrando and Guglielmo (such strange names in this opera ─ Fiordiligi, Guglielmo…) were so smitten with the sisters that their giggles and giddiness reminded me of teenage boys with their first crush. Even while disguised as Arab sheikhs their bubbling enthusiasm for their sweethearts couldn’t be stifled.

The thalassic score accompanied the harmonious singing like a sigh floating on a breeze and the lighthearted moments of comedy were balanced with some introspective seriousness. If I had one complaint about Così, it’s that it’s a tad too long: I walked out of the theater just after 11 p.m. from a 7 p.m. start time. However, the decision to travel over an hour and a half to catch the summer encore of Così fan tutte was well worth the late evening drive.

Since Così is a cute, zany opera, I thought a dress of a similar description would be the perfect outfit for the summer encore. Best of all, I didn’t have to look beyond my mother’s closet for the answer. Like me, my mother used to sew many of her clothes and thankfully she has kept nearly all of her dresses and jumpers from the 1970’s and 80’s. One of my favorites is the black and white polka dot dress with dropped waist and puff sleeves that fits me well. I even found the original pattern in the worn, bulging cardboard pattern box… Dress #2 at the bottom of the envelope was obviously the intended look my mother desired…

Keeping it classy with pearls, long gloves, and a ladylike chignon, I was decked out for the escapades of Mozart’s Battle of the Sexes.

The opera’s finale was a happy one and the men married their betrothed. But back to the all important question: were the women faithful to their fiancés ? No. Did I care ? Hardly ! All’s well that ends well ─ the opera was too charming not to forgive and forget.