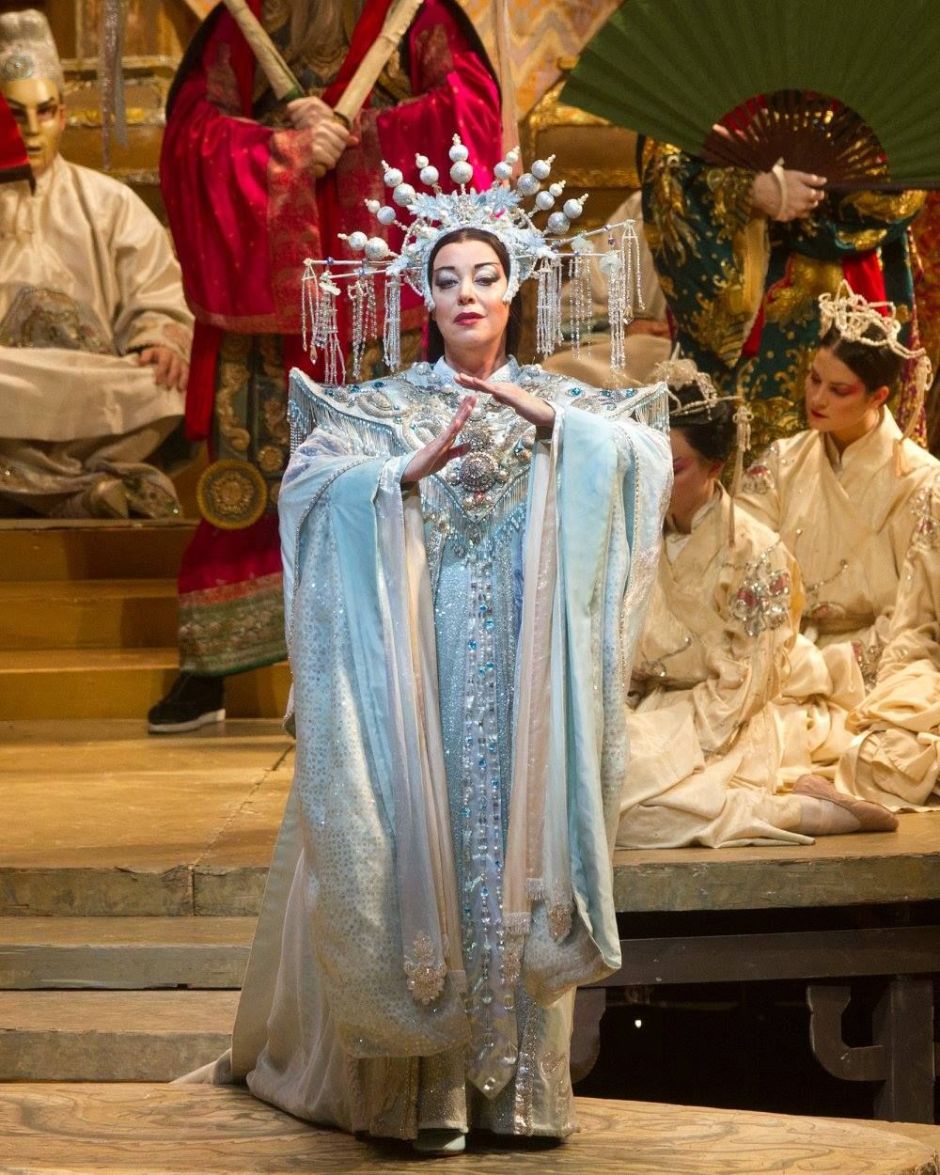 My first Puccini opera… what a thrill ! Posthumously premiering in 1926, Turandot feels more like a Grimm Brothers’ fairy tale than an Italian opera ─ a haughty princess, arduous riddles, and a mysterious suitor sheltering a life-or-death secret all lead to a storybook outcome. Having heard the praises of Puccini (and the exulting melody of “Nessun dorma”), I was more than ready to attend the encore of Turandot in early 2016. I even unfurled my reproduction poster for the occasion !

Only Franco Zeffirelli could create the spectacular setting of Turandot. Still a Met favorite from when it debuted in 1987, the sets and choreography shine as brightly as the music itself. When the stage darkens during the scene change in Act II, the resulting lapse rewards the spectator with a breathtaking display of an ancient Chinese palace.

Here I must opine… As the audience anticipates the much beloved “Nessun dorma” in Act III, I couldn’t help but wish for a supplemental scene prior to the big aria of a frazzled Turandot, pacing in her bedchamber with her servants while racking her brain as to what the stranger’s name could be… I think it would have added another dimension to the desperate drama.

Nevertheless, I adored the opera and everything about it: the treacherous secret (which cost Liù her life), the surrender to love, the happy ending ─ what’s not to like about Turandot ?

“Chinese” is not a style typically engendered by my closets. However, there was something I could manufacture in order to convey the right amount of dynastic imperialism… While Zeffirelli’s sets are extraordinary, the costumes in Turandot are just as jaw-dropping, especially the ostentatious headpieces worn by the titular character. My goal was to create my own unique headpiece that was as visually stunning as it was logistically sound. Browsing ideas for Turandot headpieces, Birgit Nilsson’s ornate costume from 1961 was my favorite and became the inspiration for my own creation.

Before creation could begin, some engineering chicanery needed to occur since there were many obstacles in the way of the perfect head accessory. Just imagine ─ wearing the headpiece in the car on the way to the opera, leaning back on the headrest of the seat in the theater, potentially blocking someone’s view of the screen, etc. Using a basic headband as the foundation for the headpiece, I took measurements of height and width from the top and sides of my head in order to avoid any damages to the headpiece (and theater patrons) while realistically evaluating how tall and wide I could reasonably fashion the accessory.
There was also the ‘weight’ component to contemplate: when the entire superstructure is built off a cheap headband, the overall weight of the headpiece needed to be kept to a minimum. Keeping this in mind, I used bamboo skewers for the tall, emanating stakes and was careful to select materials that doubled as both fashionable and functional.

Decorated in sequins, rhinestones, and beads, a healthy spray painting of gold helped turn an ordinary cereal box and plain wooden skewers into a dazzling work of art.

Although my closets lacked chinoise appeal, I still tried my best to create a Chinese-themed outfit: a monochromatic red turtleneck and pants proved a reliable choice for the chilly February evening while the vibrant scarf I bought at the Port Authority in New York was just the right pop of color to match the headpiece’s prismatic brilliance.

The pre-work engineering paid off: I was able to ride to the theater with the finial just barely clearing the headliner of the car. And even though I accidentally bumped into the dark corridor on the way to my seat, no one was injured in the process, including the headpiece.

From Birgit Nilsson to Franco Zeffirelli, Puccini’s final opera is a fountain for artistic pleasure. Turandot may have been my first Puccini opera, but it certainly won’t be my last !