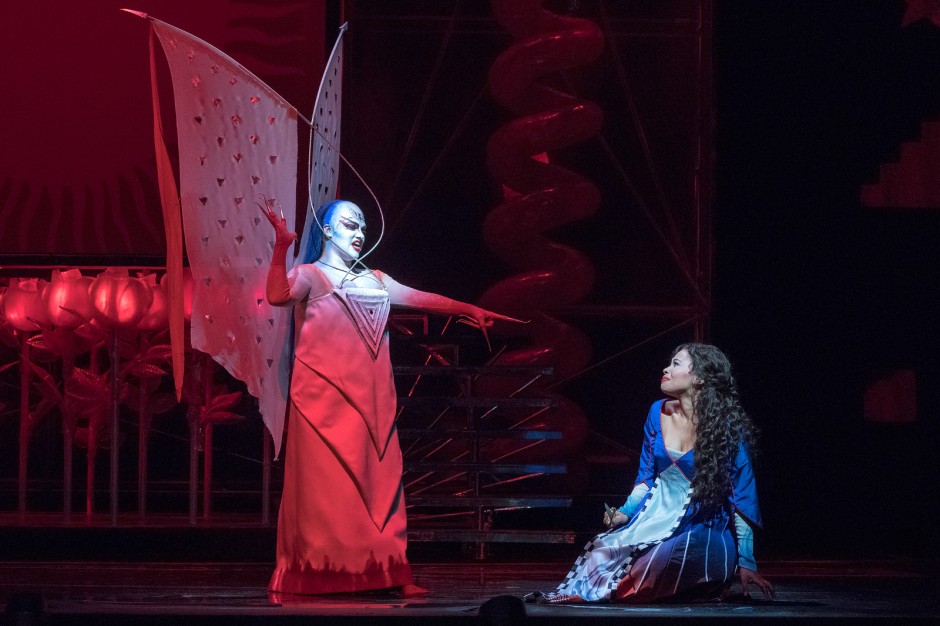 If you have a penchant for fairy tales like I do, you’ll find genuine delight in Mozart’s final opera, Die Zauberflöte. Centered around a quest for truth and knowledge (and a damsel in distress), the opera is as noble as its hero, Tamino. Between stipulated testing and bravery of self-determination, I willingly succumbed to the dashing chivalry of the prince on a mission to rescue the princess, Pamina.

If the pursuit of true love doesn’t tickle your fancy, the spectacular production by Julie Taymor (of “The Lion King” on Broadway fame) will surely elicit at least one or two gasps of wonder and amazement. The uniqueness of the costumes and puppetry fits seamlessly with the whimsical roots of the opera. There’s even creative comedy for those still unpersuaded.

Still not convinced ? Perhaps a fearsome villain is more appealing to you and luckily Die Zauberflöte showcases one of the most despised in the bewitching Queen of the Night. While the name sounds like a beacon among the stars and moon, the wicked queen is far from harmonious and caused me a slight shiver, partially due to the most unattractive styling of the character’s costume and make-up. If there was any doubt as to whether the Queen could make a face turn later in the opera, her appearance alone body slammed those speculations onto the floor.

With the Queen of the Night singing the most famous aria in the opera (and I’m sure you’ve heard it, too), it was without question that I would disguise myself as this otherworldly being for my outing to the opera. While the Julie Taymor costumes are original and ostentatious, I didn’t necessarily feel they best embodied the title of “Queen of the Night” so I imagined my own vision of the character.

I had a long black velvet dress in my closet ─ that was a running start ─ and now I needed to accessorize the pitch black gown to fully realize its nocturnally regal potential. A queen needs a crown, right ? I thought so, too, and cut a pattern out of a corrugated cardboard box, spray painted it silver, and glued on separately cut star and moon shapes (spray painted and glittered) to the tiara. Silky black ribbons were used as the fastener. The Queen had her crown !

“But what else ?” I pondered. The idea of wearing various accessories whisked through my mind, but when I spotted a shimmery black organza printed with silver stars online, I knew I had found my answer. What could be more stunning than a floating veil of the night sky ? Using 2 yards of fabric, I gathered one widthwise edge and sewed it onto a hair comb. To the opposite widthwise edge, I drew arced lines creating a circular perimeter around what became the bottom of the veil. All raw edges and selvedges were finished and voilà ─ a veil ! Just look at how it sparkles in the evening breeze…

With all the articles combined together (including my long black gloves and jewelry), the outfit’s celestial beauty belied the cruelty of the Queen.

Psst ! This outfit also became my Halloween costume for the year. My bedazzled spider bracelet simply begged to be taken trick-or-treating…

As charming as the starry night, Die Zauberflöte goes down as my favorite Mozart opera. The music dazzles and the story is uplifting. But I’m a sucker for fairy tales, after all…